Professor Aristidis Tsatsakis was awarded for his distinguished contributions in the development of the environmental ecology science in FEFU and world wide.
It is the first Honorary Doctor Causa title for FEFU university since it's establishment.
Professor Tsatsakis lecture during the Scientific Council on Toxicology challenges in the 21st century. 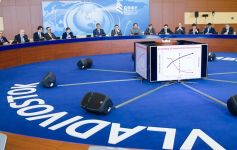 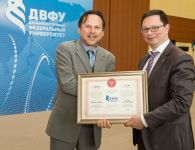